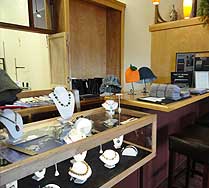 Carl Holton was born in Bridgton, New Jersey. After being discharged from the Army at the end of World War II, he came to Boston where he attended PJ Troy, School of Clothing, Drafting and Design. Subsequently his travels took him to Los Angeles, California where he worked on the USS Lurline Cruise Ship as a tailor and from there he went on to work for Sy Devore.

Due to his love of New England, he returned to Boston in the spring of 1951 where he was employed as tailor at Louis of Boston, the most exclusive men’s store in the city then, and still today. After his marriage to his wife Mary from South Berwick, Maine, he commuted to Boston until he opened his first tailor shop, Mr. Carl’s in Dover, New Hampshire in 1955. Carl came to Portsmouth in 1979 where his son Rheinhold started in the business working by his father’s side until Carl’s death in April of 1990 and operates now with the help of his brother Jay.  They continue the successful operation in Portsmouth, NH – the second generation.

Rheinhold has more than 30 years of experience in the trade and the same pride for quality and service as his father. He will continue to look at innovative ways to better the business without losing track of where he came from.